Never trust a paki with a kid: what do these marches say about the white community in England?

There’s a big “I love tommy Robinson” March in Leeds today. Leeds, allegedly the fourth largest city in England. I find that hard to believe, but google says it’s true. And it’s big, btw. It isn’t a few people. It isn’t a few hard line crazies. It’s more people than were on the “save our nhs” march. It’s a significant number of people. When I say people, I mean “men”. I only saw men.

It’s a beautiful sunny day, so I decided to come into town and treat myself to a bottle of beer in the sunshine. But the “city” is full of police, who in Yorkshire are a clear and present danger to the citizens, and I can’t hear the music in the cafe because of the constant chanting of the demo, which sounds like the stuff you hear on football terraces (not a surprise, IMO, but every time I talk about how racist football fans are I get told in the most vicious terms to shut up, even though it’s true). 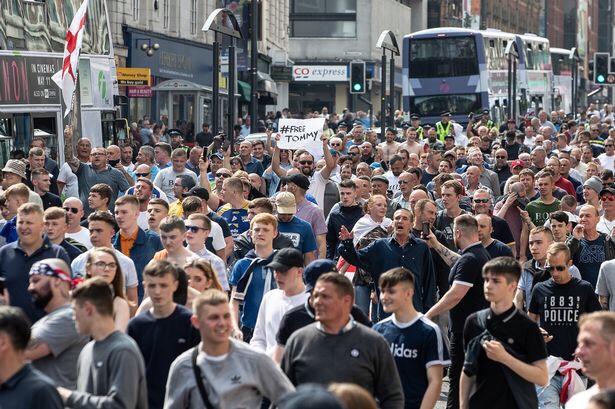 Outside the cafe, get chatting to a couple of typical lefty hipster dudes. Roll up fags, long hair, beards, tats, the works. Northerners. Their take on the march? That you should just ignore them, let them do their thing, because we live in a democracy, everyone has a right to say whatever they like, and “there’s no point meeting hate with hate”.

Easy to say, when you’re a white man, I say.

I sit on the terrace, and watch the good citizens of Leeds ignoring the racists. Why should they let them ruin their shopping , after all. We will win by carrying on. Uhuh. We won’t let them interrupt our way of life. Uhuh. They sicken me. Every one of them looks like a pig in human clothing, to me. How can you just continue about your business, while men march through town chanting and waving flags, in front of the kids, right through your yard, and you say and do NOTHING?! You just carry on with your shopping because hey, you wanna go to John Lewis, and it’s nice in John Lewis, so just ignore them and be about your business.

It’s grotesque to see them waddling about with their shopping bags under the beautiful sunshine while the racists parade proudly and the police we pay for defend them. To see the crowds of racists and flag wavers growing in numbers and sense of entitlement, because they are not challenged. They are allowed to march through the city waving their flags and talking their shit and no one does anything.

I am reminded of nothing more than this scene from Cabaret.

They are the “ordinary Germans” the ones who let it all happen and then say “we didn’t know”. As I type, the chanting has turned nasty. It’s getting louder. It’s frightening now. I’m scared. I’d be even more scared if I was black or Asian. But none of the good people of Yorkshire will do anything. The staff have come to the door and are watching. Watching, but saying and doing nothing.

I want to tell you, you make me sick. All the white people, all the fake leftists who smoke their roll ups and spout shit about democracy and “let people talk their talk” because “we live in a democracy” make me sick. I hate you as much as I hate them. You make my skin crawl. Those people, the ones on the march, they are damaged people. They’re stupid, they’re weak, they’re not in control of themselves, and they’re being manipulated. You are not.

“Just ignore bad behaviour” is a tactic used when training puppies, or toddlers. It works up to a point. When the kid throws a tantrum because I won’t let them have an ice cream, when the puppy jumps up and up at me because he wants picked up, that’s an “ignore the bad behaviour” situation. When the toddler starts calling other kids pakis and threatening to beat them up, that’s not an “ignore” situation, and a person who does is a motherfucker. They are the ones to blame, not the kid. They are weak, lazy and afraid, and the kid knows it, and so does the paki.

“Let them be racist, because you will never win anything by being racist” said lefty dudebro. “The tories, Donald Trump and Putin beg to differ” said me. We are sliding into Nazism, and it’s not subtle, and it’s not clever. It’s blatant, and the “ordinary Germans”who just want to keep their heads down and get to John Lewis in safety, and who pay the wages of the racist police who defend the racist marchers are more guilty than the arseholes on the march.